Jonathan Harris is CEO of Netizeen, a company which offers software to add social features to magazines.

Two years ago, Steve Jobs stood in front of a room packed with self-confessedApple fanatics and held up the iPad, the most “magical and revolutionary device” in the history of the company,” he told the audience.

Among those hanging on every word were magazine publishers who believed they now had the tool needed to give them a competitive edge. Their readers finally had a lean-back digital option. A page could be turned with the swipe of a finger. Though cautiously optimistic, publishers were hopeful that this new device would offer their readers a magazine experience that would propel them into the digital age. They also hoped it would rescue what was rapidly disappearing from their back pockets.

Fast forward two years, and publishers find themselves fighting even harder to compete in a rapidly-changing digital ecosystem. While Apple has made good on its basic promises, mainly delivering a device-driven audience and facilitating bulky back-end micropayments, it has also consolidated its role as the dominant intermediary, edging publishers closer to a state similar to that of the music industry. It has fostered a reliance on its closed platform and ultimately stifled innovation.

If publishers want to stay in the game and establish a future for magazines that is less uncertain than the one they are currently facing, they must embrace options outside of the current Apple-dominated landscape and hedge against its control of both the end consumer and the content delivery mechanism.

You don’t have to be the smartest kid in Silicon Valley to know that the absence of customer data hurts brands. In my discussions with advertisers, the number one reason for their lack of investment, or in some cases dis-investment, into tablet editions is too little data that comes too late.

Ironically, publishing has always been about packaging and selling audience data, so there’s a natural affinity with the concept. But in a digital era, it is the depth, quality and timeliness of audience data that is separating the winners from the rest. This is where publishers are falling increasingly far behind as they are left scrapping for relatively low quality subscription data from Apple.

From the beginning, iPad magazine development was approached from the wrong angle, driven by Apple-centric thinking that only addressed the question of what can we do for readers rather than what they can we do withreaders. There is an important difference between enrichment (adding videos, images and graphics to the page) and engagement (establishing a meaningful contact or connection). Engagement appears to have been ignored altogether and the result has been apps that focus on leveraging the operating system more than they do the connectedness of the device.

Publishers must consider new ways for readers to consume – and connect around – magazine content. They need to design and track content experiences that are more socially driven, building new direct channels of engagement and extending the touch points of readers with content and each other.  As advertisers increasingly demand that publishers move upstream with their businesses around data, providing more granular insights about their audiences is going to be a necessity, not a choice.

A new data-driven business is needed to gain greater control of future revenue growth. This upstream model is within the reach of publishers today, and those that are able to develop – and own – their brands’ engagement data will not only survive … but thrive.

The takeaway: Sell your data, you earned it.

Magazines were one of the earliest mechanisms for social grouping, and before the onset of the digital age, publishers were very good at building and monetizing highly valuable networks of similar people built around different content verticals. But as the business model of online content has evolved, publishers have seen this position erode and with it, their revenue.

We are now at a tipping point and if publishers want to claim any meaningful portion of future digital revenue, they need to make a decision about whether a magazine is a container or a connector. The definition makes all the difference.

If magazines compete as containers of editorially aggregated content then the future is pretty bleak. The digital content containers offered by aggregators like Flipboard and Zite are much more compelling than any single source alternative and fit far better with the nature of content consumption on the Web that is forming itself around streams. But if magazines are seen as connectors, bringing clusters of people together around well-defined special interests then publishers may have reason to be far more optimistic.

With the iPad, iTunes and subsequently Newsstand, Apple drove native app development as a strategy by connecting access to the marketplace to developing for device. Publishers happily took Apple’s lead without consideration for the new form and function of digital content threaded through the social Web. They began to replace one type of controlled distribution for another. And although in some cases what they delivered was a newly crafted content offering, this model did nothing to re-architect the proposition of magazines on a connected device.

Native siloed app development is simply not a good model for content. It’s completely counterintuitive to develop with greater consideration for the operating system than for the Web.

There is a potential future for magazines on the tablet that is more open, collaborative and connected, but readers, not the device or the marketplace, must be at the heart of the next evolution.

The takeaway: It’s an open Web, don’t build for a closed one.

You may argue that the damage being done to publishers is self-inflicted; Apple gave them the tools and what they did with it was up to them. But actually the device Jobs introduced as the iPad was designed to effect control right from the start.

In a 2004 interview with Businessweek, Jobs said, “I’ve always wanted to own and control the primary technology in everything we do.” Owning the technology is one thing, owning the audience another.

To stay ahead of the game, publishers must think outside of the Apple box. They must take true ownership of their digital brands, regain the direct relationship with their customers and figure out how to increase revenues by putting the reader at the heart of their strategy. In short, if they are to flourish, they must take control of their three D’s – Data, Development and ultimately their Destiny. 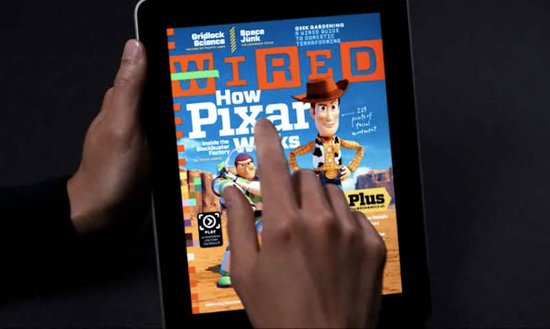